LNG is a clear liquid, odorless, colorless, non-corrosive, and non-toxic and weighs less than half that of the water. It must be maintained cold (at least below -82°C]) to remain a liquid.

Natural gas is composed of about 90% methane but it may also contain hydrocarbons (ethane, propane, etc). The volume of the LNG is about 1/600 of its volume as gas so the liquefaction process is used for the transportation on long distances. The gas liquefaction process is made by the compression of the gas at moderate pressure and cooling at temperature of – 160°C. The process removes the oxygen, carbon dioxide, sulfur and water.

LNG storage tanks are always with extremely efficient insulation between the two walls. Large tanks are cylindrical in design with a domed roof. The smaller quantities of LNG (70,000 gallons or less) are stored in vacuum-jacketed pressure vessels that keeps the right temperature and pressure.

About us
Our services
Spot cargo
Financing
Consulting
Contact us

The first Liquefied Natural Gas plant went into operation in West Virginia (U.S.) in 1917 and the first commercial liquefaction operation was built in Cleveland in 1941. Almost two decades later, the world’s first LNG carrier transported a cargo of LNG from the USA to the UK and this has demonstrated that large quantities of LNG could be safely transported across continents. LNG Transportation by marine LNG carriers has a long record of safe operation and there is no major incident that has been recorded over the past decades.

The USA exported its first LNG to Japan in 1969 and since that time the demand for LNG has always continued to grow in Asia.

Japan is currently the largest importer of liquefied natural gas and followed by South Korea, China, India and Taiwan. We should continue to see in the coming years a growing and sustainable demand for LNG in Asia and the largest LNG projects today are in Australia.

Major Oil & Gas companies such as Inpex, Total, Exxon, Chevron and Shell has initiated few years ago the concept of floating LNG because of the long distance of the gas fields from the shore.

LNG in the future

In the future, the LNG projects may expand on other continents such as Africa where promising resources are under exploration on the east part (from Mozambique & Kenya) and the demand will continue to grow in China, India and in emerging markets. 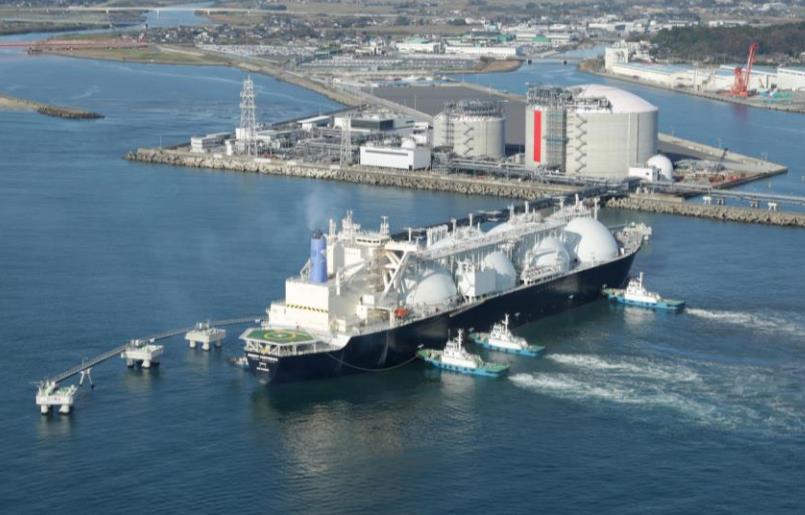 In today’s market, the LNG spot cargo trade has shown a healthy growth and there is a variety of trading models (tenders for multiple & single cargo sales, LNG cargo brokered trades, cargoes sold in chains, speculative trading positions, etc) and that involves trading firms and investment banks among the key players.

An increasing trend that many people see in the LNG spot market is that LNG cargoes will be traded between between the Asia Pacific markets and the Atlantic Basin due to the high LNG price in Asia and the surplus supply available in the Atlantic Basin.

Japan is now the largest LNG spot cargoes purchaser in Asia and has driven the price of LNG cargoes to a level where some countries such as China, Thailand, Vietnam and the Philippines are revaluating their plans on expanding LNG cargo imports. Therefore, it is not clear yet when those countries can start assuming a more important role in the LNG market.

– LNG Trains for the production

– LNG Carriers for the transportation

Natural gas is the cleanest burning of all fossil fuels and LNG is produced with a relatively smaller carbon footprint. Natural Gas emits 50 percent less carbon dioxide than coal when it burns.  However, LNG remains a fossil fuel and is less clean energy than solar or wind energy.

Cheniere energy appears to be taking a lead to the global LNG market. Cheniere is renovating their Sabine Pass, Louisiana import plant and has announced four long term supply contracts. A most recent contract being a 20 year commitment with BG Group, Inc. based in Berkshire, England. Moreover, Cheniere is planning to “reverse” another terminal, this one in Corpus Christi, Texas. Both facilities are in the Gulf region, to serve European or Asian markets.

Reversing these Gulf terminals comes at a time when Japanese LNG consumption increased by 32% in December, 2011. A result of Japan’s nuclear industry suffering inconfidence and safety inspections due to the Fukishima disaster. The U.K. also has an issue by importing 40% more LNG year over year in the January through November, 2011 period. Of alarm is that for 2011, 90% of such imports came from Qatar, according to a January 16 report from Platts, citing Deutshe Bank. This 90% supply concentration compares with 44% of supplies coming from Qatar in 2009.

While the U.K.’s LNG consumption has dramatically increased, Argentina also showed a dramatic increase. In 2011, Argentina imported 2.9 mt of LNG, an increase of 142%. This contrasts with the country’s 2010 imports of 1.2 mt.

Should this data seem unusual, it appears to have support. Consider the long term rates for tanker transports reported in January. It appears that growing LNG demand from Europe, Asia and South America are pushing daily spot rates for LNG transport to records. LNG transports ran at $150,000 per day for tanker transports in January. This compares with $125,000/day in December, 2011. Long term lease rates were also driven up to a new record, by Japanese firm Tokyo Electric Power Co., a firm associated with the Fukoshima disaster. They contracted for a three year charter with Golar LNG for $137,000/day, while rates range from $143,000 to $155,000/day. Golar spot target is $198,000/day.

Capacity to transport LNG is not keeping pace with growing demand. Currently, over the next year, only 2 new tankers are expected to be deployed. Over the next two years, 10 tankers. That’s 12 tankers in 2013. At current prices, the market will respond. Some anticipate that the long term charter rates already price in some 30 to 40 new tankers being deployed in three year’s time. Ship yards should become profoundly busy.

Evidently, new markets do seriously exist for U.S. naural gas, but it must be transformed into LNG so that it can be transported outside a pipeline. And, as said earlier, Cheniere Energy has the lead on that pursuit. Development of infrastructure in the U.S. is a first necessary step. That is, aside from our existing pipeline shortage domestically (look at the Liquefied Natural Gas in New England, Keystone issues effecting all dynamics), one must consider reversing our LNG terminals to export, as opposed to import. Such terminals that exist, for sooner than later deployment, are in the Gulf, leading to higher shipping charges due to tanker rates. Is this our dilemma in the global market?

Let’s see…Cheniere is leading the cause to open new markets to U.S. exports. Such markets that were heretofore unknown, but with all the potential of profiting through the supply/demand balance. Yet, Cheniere has a debt burden of $3B, while the U.S. has so much of the gas (high GOR wells are restricted from flaring ).

On the West coast, in Canada, we can see a formation of partners. Royal Dutch Shell, China National Petroleum Corp., Korea Gas Corp. and Mitsubishi are all looking to build an Liquefied natural gas export facility in Kitmat, British Columbia. They hope to be operational by 2015-2017 and expect to supply Asia with 800 mmcft/day. A second project is planned, also in Kitimat involving Apache Corp., EOG Resources Inc. and Encana Corp. Their plans are not as complete.

While these plans continue in the U.S. and Canada to arbitrage price differentials, Australia has her own project. Australia’s Total SA and Japan’s Inpex Corp. received approval to build a $34B (usd) export plant over 5 years. This joint venture seeks to serve Japan and Asia.

There does appear, however, to be a comparative advantage to the west coast Liquefied Natural Gas producers versus Australian producers. This advantage is due to geography. It is a difference between the shores of Australia versus Canada’s West Coast. From Australia to Japan, 4,400 nautical miles exist by thumb measure, while Canada to destination is 4,200. Based on current tanker charges, 200 miles could save 2 days fees…
*Source: http://EzineArticles.com/6929206

Japan with little energy resources of its own is one of the largest importers of petroleum products in the world. The fueling need of Japan is increasing and the quest for green and renewable energy is making Japan attractive to alternative sources of fueling its economy like liquefied natural gas and nuclear power. After the devastating earthquake and tsunami the Japanese energy market is set to transform. Due to the devastation of the Fukushima Nuclear Power plant during tsunami, public opinion about nuclear power has changed in Japan. Only two nuclear power plants out of 54 are functioning and no reactor in Japan that shut for regular maintenance and for stress tests has restarted as local governments demand a new, post-Fukushima nuclear safety standard. The power supply shortage now threatens the economy of Japan after the crisis.

As a result of this nuclear power supply disruption, the demand for Liquefied Natural Gas and crude for power generation has significantly increased. Public opinion remains skeptical of nuclear power prompting Japan to resort to more use of LNG. The use of LNG is likely to increase to 30 to 35% and within a decade demand can increase to 85 million TPY. This is prompting Japan for seeking to look for overseas suppliers.

North American market looks to be the next emerging suppliers market for Japan. With the boom in natural gas extraction in the US and gas from oil sands of Canada the future of LNG in bright for the suppliers in the short term. The supplies are already squeezed due to the increased demand from Japan and delay in the completion of Australia LNG projects. The low gas prices in US of under $3 per million BTUs are encouraging firms to invest in LNG facilities in US prompted by huge arbitrage opportunity existing in the international market. Japanese companies are paying in the range of $21 and $18 to seek future LNG supplies.

The Japanese government is looking at cheap supplies in the form of LNG to meet its growing energy demand. Post- Fukushima world for Japan highlighted the risk associated with the use of nuclear energy and natural catastrophic risk management. LNG is the only solution in the short term for the Japanese government to bridge the gap between supply and demand. Global funds are betting on the increased use of LNG and LNG spot rates are climbing after the disaster. There is an increased opportunity for investors to make money in long term spot rates of LNG because of the positive future outlook of LNG and tight supplies.